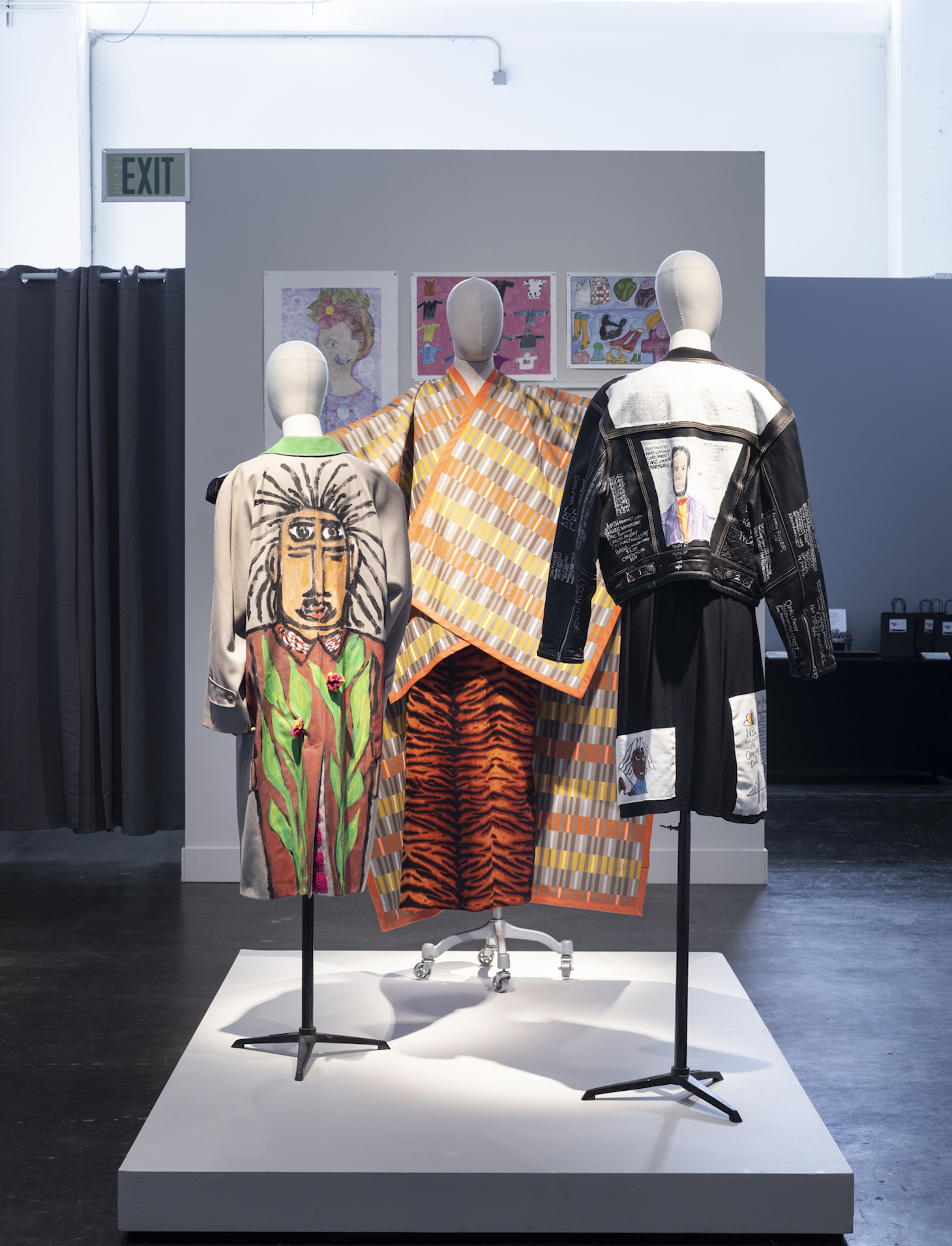 SAN FRANCISCO — Victor Molina hates the word “fashion.” Although he worked as a fashion designer in Los Angeles, he feels that it has class and consumerist implications. But the Havana-born, Pasadena-bred artist loves sewing, embroidering, and working with textiles and fabrics. Molina, a teaching artist at Creativity Explored, a San Francisco studio and gallery for artists with developmental disabilities, he noticed that the CE artists loved these projects as well.

“There’s something about clothing and costuming that people get really excited about,” he said when we met in a Creativity Explored studio. “Whenever I work with a project where there’s sewing and embroidery, people get very focused. It’s very calming.”

In 2018, Creativity Explored artists held a fashion show, and Molina felt they enjoyed dressing up and presenting their designs. Ariel Zaccheo, a curator at the Museum of Craft and Design, saw the show with Creativity Explored’s former curator Cléa Massiani and liked it so much that she wanted to put on another one. The result is the exhibition Mode Brut.

The pandemic delayed but didn’t derail those plans. The younger teaching artists at the studio delivered textiles and fabrics to the artists, Molina says. The artists would bring him their sketches, and he would make them into clothes.

Artists worked with donated fabric and used clothing to create their designs. The show emphasized collaboration, both with the designers and with one another. Participants worked together over Zoom, as well as email, phone, and mail. This resulted in, for example, a jacket created by several artists with an illustration by another and a patch by someone else.

“All of the work from the Creativity Explored studio line was completely authorless,” Zaccheo noted. “There were so many different hands involved, and each outfit has five or ten authors.”

Making the show easily accessible to as many people as possible was also important. That meant offering an audio tour as well as  tactile areas and avoiding art jargon in the wall texts

“This is the most broadly accessible show we’ve ever mounted,” Zaccheo expressed. “Some of the measures we’ve taken are translations in three different languages in wall texts and closed captions on the video.”

Zaccheo emphasized that they also wanted to change people’s perceptions of what fashion can be.

“The artists were thinking about accessibility,” she explained. “Often for people with different body types, their access to fashion is limited. These artists aren’t necessarily making clothes that are out there and crazy and wacky. They want things that are wearable and make sense to the artists who helped create them.”

One of the artists, Joseph Omolayole, has a degree in fashion design from Skyline College. He worked with Bonanza, a collaborative practice that “strategically challenges the fixity of identity through different forms of signaling, posturing, flexibility, and resilience.” They focused primarily on lounge wear, and the series includes an outfit that Bonanza designed to look like something “Billie Eilish would wear while working in the community garden.” The line is also geared to showing how sheltering in place changed their personal style, as people dressed more comfortably.

According to Zaccheo, Bonanza created Omolayole’s designs, held “drawing parties” with another artist over Zoom, and worked with yet another, whose digital prints they transferred to fabric.

Omolayole loved making sketches and emailing them to Bonanza, but what he enjoyed most was the fashion show.

“It was very fun. I modeled one of the blazers. I loved seeing what everybody dressed up in and was modeling. It was amazing.”

Mode Brut continues at the Museum of Craft and Design (2569 Third Street, San Francisco, California) through January 23, 2022. The exhibition is curated by Cléa Massiani and Ariel Zaccheo. In addition, there is a video of the fashion show and the Creativity Explored gallery has been transformed temporarily to a Mode Brut atelier.

Grimanesa Amoros’s Golden Array invites onlookers to reflect on connections through “the invisible trajectories of a wireless universe.”

Until now, descriptions of the city were mostly limited to the written accounts of European explorers, says a new study in the journal Antiquity.